The Board of CHS is composed of a cross section of the community with representatives from multinational corporations and small businesses, churches, and legal and financial firms. Board members are not paid for their time and expertise, and provide an important link between CHS and the English speaking community in Belgium. They also offer support and guidance to the administrative office team. 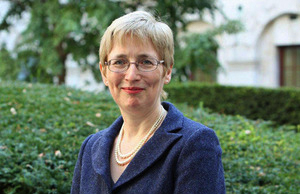 Alison Rose: "Moving to a foreign country is an exhilarating experience. But there is a lot to learn, and it helps if you can draw on advice from those who know their way around. Those of my own team who have moved from the UK to Belgium have found the CHS telephone Helpline invaluable on a wide range of issues.

And CHS also support English speakers who are finding life particularly hard because of mental illness. This is so much more common than many people suppose. 1 in 4 British adults experience at least one diagnosable mental health problem in any one year, and 1 in 6 experiences this at any given time. CHS’s Mental Health Centre is very experienced in dealing with these issues, which is important when sufferers may be far from their normal support networks.

Of course, getting involved in local organisations is an important part of starting to feel ‘at home’ in a new place. So I would encourage readers of this website to consider volunteering for CHS. Training and supervision are provided."

Jeremy arrived in Belgium in 1990 and was the Head of the Arthur Andersen office of regulatory affairs. He later joined EY and was their Regulatory & Public Policy leader until his retirement at the end of 2016. He is a former President of the British Chamber of Commerce in Belgium and Vice-President of COBCOE, the umbrella organisation for all British Chambers in continental Europe. He is also the current president of Professional Accountants in Belgium and a Board member of the Boitsfort Rugby Club. He joined the Board of CHS in May 2018.

Stephen arrived in Belgium in 1986 as a recently qualified accountant planning on spending a few years abroad and then returning to the UK. After 30 years he is still here. During his professional career he has worked for large American corporations in the areas of accounting, audit and systems. Having been involved in the ex-pat sporting community both as a player and treasurer for Royal Brussels British Football Club Stephen now wants to help in other areas including offering his financial experience to support CHS in the role of Treasurer.

Lisa is a Clinical Psychologist (M.A. in Clinical Psychology, University of Münster) and a German state-recognised Psychotherapist for children, adolescents and adults. She is trained in cognitive-behavioural therapy, family therapy, client-centred parent counselling and play therapy, and integrates psychodynamic and trauma approaches. Lisa joined CHS in 1990, and, as well as working in the adult and children team, was a professional supervisor to the CHS Helpline for many years. Lisa Classen aims to ensure that CHS continues to provide comprehensive and professional mental health services to the international community in Belgium.

Beverley leads the team of office volunteers at CHS. She initially arrived in Brussels many years ago, lived and worked here for about 8 years, and then left to travel with her family, living in different countries, before returning to this city.

Niki has been in Brussels for 17 years, where she has worked freelance, obtained a degree in psychology and raised two kids. She has worked as a helpline volunteer at CHS for 5 years and she joined the Board of CHS in May 2016.

Laura Hoffman has called Belgium “home” for over 25 years and is an avid supporter of the Community Help Service. No stranger to the expatriate community, she co-founded Belgium’s first English-language news portal, www.xpats.com in 1997, helping international residents of Belgium connect through this interactive channel. She has worked in the Brussels area within the international communications sector for over two decades and today heads her own agency where she serves as a global brand strategist. Laura joined the board of CHS in May 2015, and is pleased to assist CHS find continued success as a trustworthy organization created by expats, for expats as they navigate the joys and challenges associated with life and living abroad.

Malcolm came to Belgium over 40 years ago. After 10 years of teaching he moved into business and International Human Resource Management with a number of large firms, later working internationally as a Consultant in Human Resources. Malcolm's wife, Françoise, is French and their two sons live in Belgium. It was one son's struggle with the complications of bilingualism in his early school days that brought the Johnsons to CHS. Malcolm joined the Board as a way to 'repay' the support he and his family received from CHS. He has since helped the organisation expand its contacts in the business world, and has represented CHS in the community, seeking sponsorship, and organising fundraising events.

In 1967, when the Federation of World Health Foundations was launched in Geneva, Michael made his first experience fund-raising from the private sector to supplement the national contributions to WHO’s regular budget. Also as Secretary to the Fondation Suisse pour la Santé Mondiale, he profited from a valuable insight into the objectives of combatting disease in regions which could not normally benefit from financial assistance. Attracted by an offer from the automotive sector, he moved to Belgium to establish a company importing British products. Unexpectedly, this resulted in his adopting Brussels as home … which led to an encounter with CHS, many years later in 2006, a beneficiary of funds raised at the Tri-4-Life European Challenge. And from there originated a desire to support efforts to assist the English-speaking community.

Helpline Representative to the Board